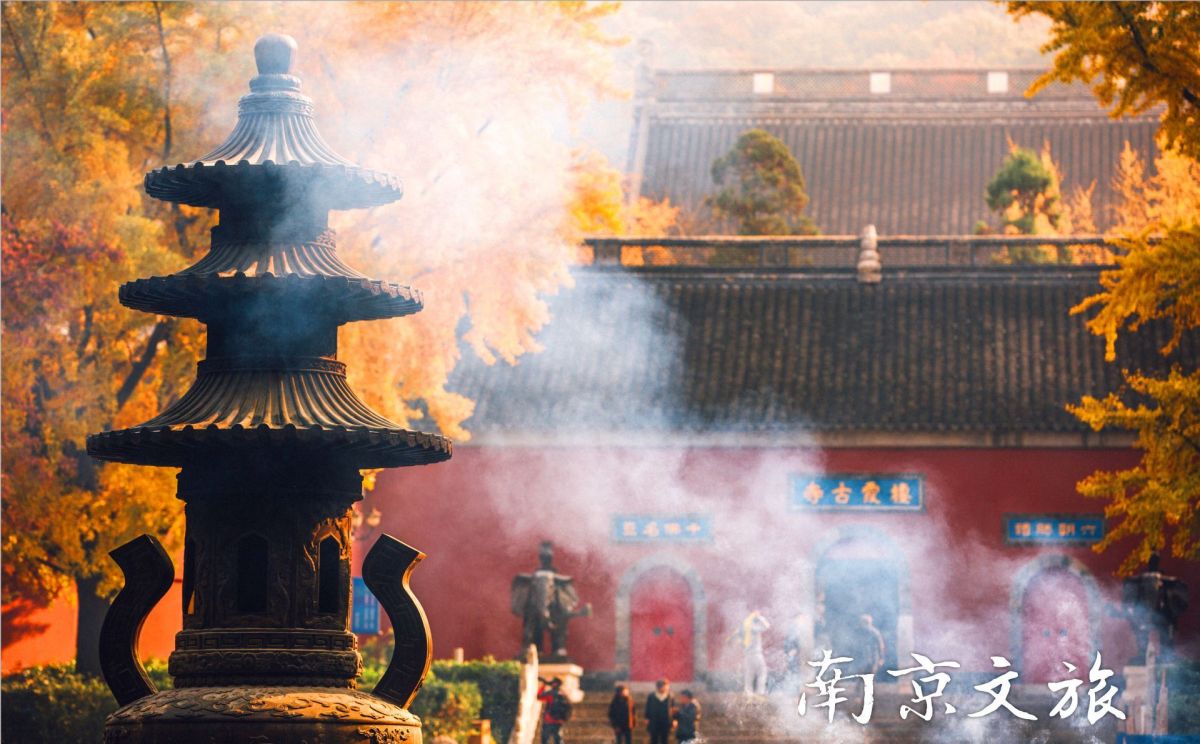 Autumn landscape is the most impressive part of Nanjing, only God could create such a wonderful palette with red and yellow, gorgeous but romantic, quiet, and poetic. Enjoying Nanjing's autumn sights, you may know what "storied dyeing" means, and experience the golden yellow and bright red of Nanjing. With the rich colors, you may be overwhelmed by the autumn landscape and atmosphere in Nanjing.

Some of the best autumn sights in Nanjing: 600-meter Sacred Path with stone statues, Yihe Road with plane trees, Qingliang Hill with ginkgo trees, Qixia Mountain with red maple trees, and colorful Zhima Ridge. Nanjing's Autumn sights are at their best. Let's enjoy them together. 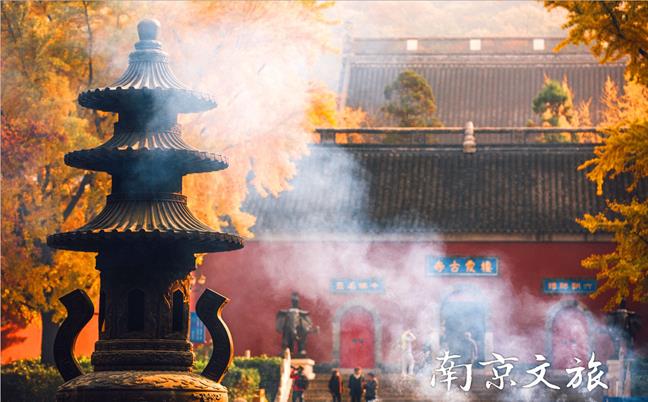 Being one of the largest imperial tomb complexes in China, it is the mausoleum of the founding emperor of Ming Dynasty, Zhu Yuanzhang and his wife Ma. The tomb was named "Xiaoling Mausoleum" because of the posthumous title of the empress "Xiao Ci". Xiaoling Tomb of Ming Dynasty is of a grand scale, magnificent architectures, and a quiet environment.

The 600-meter long Sacred Path is praised as the "most beautiful 600 meters" in Nanjing's autumn. The ancient stone statues have been placed on both sides of the path since more than 600 years ago. As time flies, the statues still greet the passers-by every day. In autumn, grey stone statues, golden ginkgo leaves and red maple leaves create a bright landscape with layers, which is praised as the most romantic path in Nanjing... 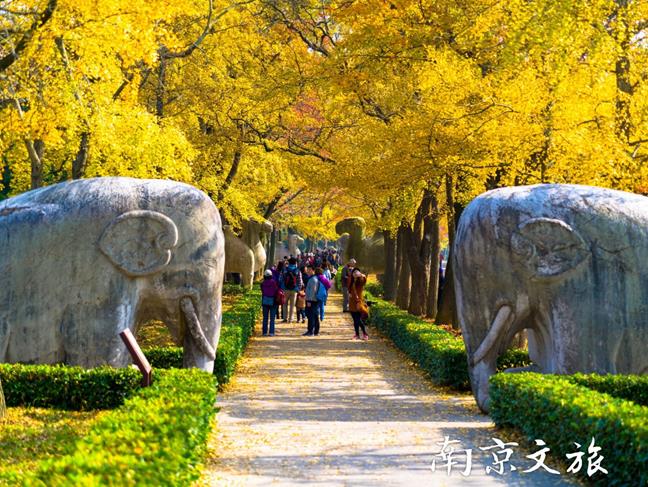 How to get there: It is 632m away from Metro Line 2 Muxuyuan Station, and it takes 9 minutes to walk.

Full of plane trees in autumn, nearly 100 western-style buildings on both sides of Yihe Road are distinctively designed. The yellow facades buildings are old and they reflect the vicissitudes of history. Visitors see the buildings through the space between the plane trees may feel a subtle sense of retro. Autumn wind blowing, plane tree leaves fall to the ground, creating a thick golden coating on Yihe Road, rustling when stepping on it, which is the whisper of autumn. 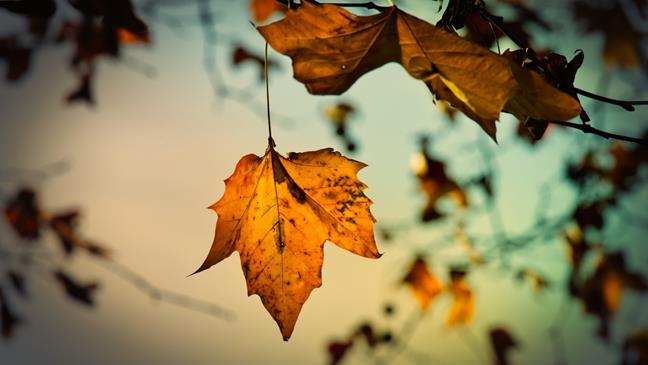 How to get there: Metro Line 4 Yunnanlu Station

Nanjing Qingliang Hill Park, known as the "historic site of seven dynasties", is located in the downtown but quiet, so it is also praised as the "city forest". The most ginkgo trees in Nanjing are planted in this park. There are more than 300 ginkgo trees in the ginkgo dell, with an average tree-age of about 60 years and an average height of 20 meters. The ginkgo dell in autumn is covered with yellow ginkgo leaves, and the overwhelming golden is astounding. 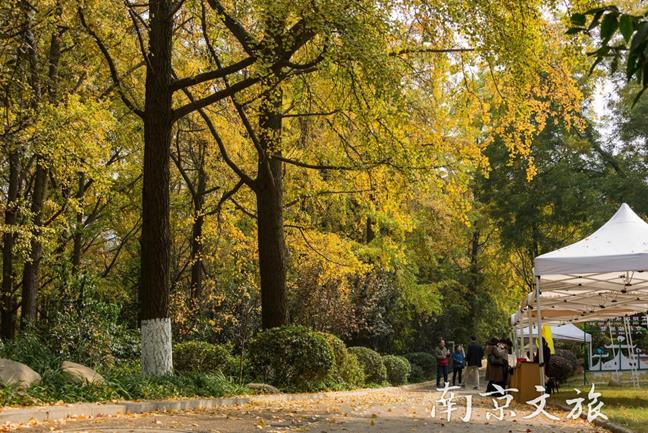 How to get there: It is 1.1km away from Metro Line 2 Hanzhongmen Station, and it takes 16 minutes to walk. 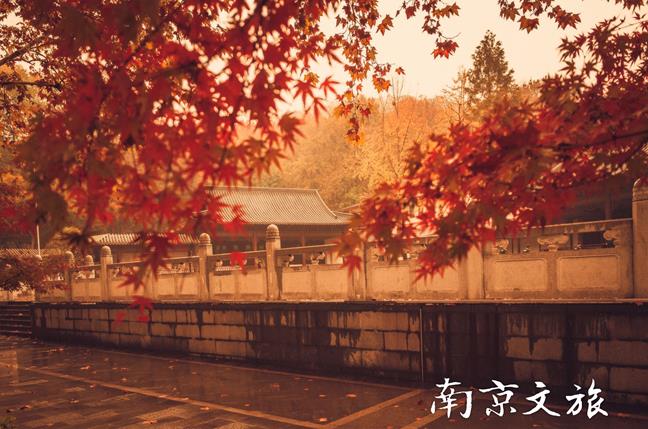 How to get there: It is 2.6km away from Bus No. D21 Qixia Mountain East Stop, and it takes 37 minutes to walk.

Iridescent Zhima Ridge is known as the "scaled-down Jiuzhaigou in Nanjing". Towering above the water, pond cypress trees turn red in autumn, presenting a large area of red, where the breathtaking beauty. The twilight through the water mist creates a dreamlike area on the lake, and this is one of the best landscapes in Nanjing's autumn. 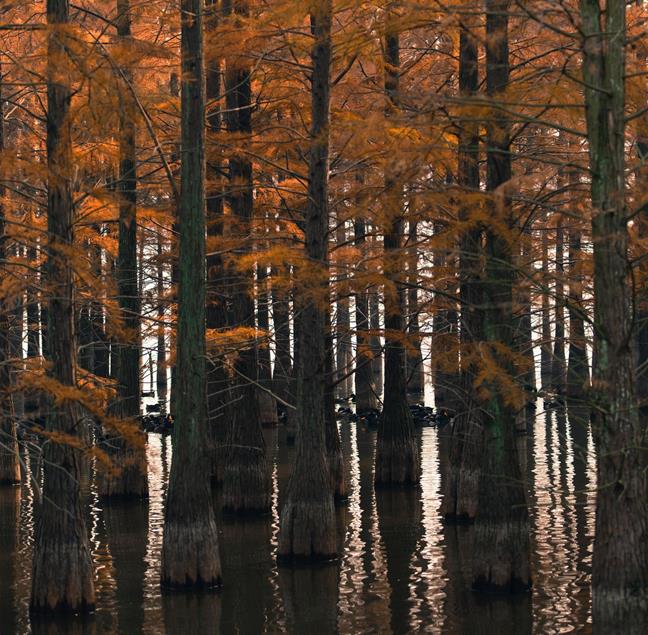 How to get there: It is 6km away from Bus Route G61 Taohua Island Scenic Area Stop, and it takes 1.4 hours to walk (driving is recommended).