Yuejiang Pavilion is of a long historical source and profound cultural heritage. Zhu Yuanzhang directed his 80，000 ambushing armies in defeating the 400，000 armies under his powerful foe Chen Youliang in the Lulong Hill in 1360, laying a firm foundation for establishing the Ming Dynasty (1368-1644) and making Nanjing the capital. After becoming the emperor, Zhu Yuanzhang climbed the Lulong Hill for the second time in 1374 and then, a turmoil of feelings welled up in his mind. He wanted to have a high building built on the top of the hill, which, supposed to tower into the clouds, should give the climber a far view, to the extent of having a panoramic view with only one glimpse, not only overseeing enemy spies and anticipating enemy activities but also making it known far and wide for his military prowess. For this end, Zhu wrote the Notes on Yuejiang Pavilion himself and renamed the Lulong Hill the Lion Hill. Then, he ordered each of his official ministers to write an article about the imaginary Yuejing Pavilion.

Among those articles, the Notes on Yuejiang Pavilion written by Grand Secretary Song Lian, was a superb work and passed down for generations with Zhu's. However, the construction failed in completion because of low productivity and weak economic strength as well as the successive years of war and others. Finally, the building of the Yuejiang Pavilion was finished in September 2001, and the pavilion began to be open to visit, putting an end to the 600-year-history with notes but without the pavilion.

Standing high atop the Lion Hillis, the pavilion is 52 meters high and has a floor area of more than 5，000 square meters in seven tiers. Taking an L-letter shape in the planar way, the pavilion's main wing faces north and the secondary wing faces west, taking on a unique "corner of two surfaces".

On the first floor of the pavilion, you can see Zhu Yuanzhang's imperial chair which was made of high-quality rosewood. Nine dragons, in lively shapes, are engraved on the back of the chair with fine engraving skills. This chair is the unique one in China. Behind the chair is a big supporting wall plate, on which are engraved the Notes on the Yuejiang Pavilion written by Zhu Yuanzhang himself in golden words. Around the wall are some introductions to16 Emperors during the Ming Dynasty.

From the third to the fifth floor, there is a model of treasure junk and a porcelain painting of eunuch Zheng He making Voyages to Western Oceans.

In order to expand the friendly relations with foreign countries, Zhu Di, Emperor Chengzu developed the shipbuilding in a big way to serve the openness to the outside world. According to records, the Longjiang Shipyard at the time was about 3 kilometers in scope. The biggest ship built in the shipyard was 138 meters long and 56 meters wide. It sailed with 12 sails on 9 masts, and could carry 7，000 tons of cargo or passengers. It could be regarded as the biggest ship in the world 600 years ago.

This porcelain painting is 12.8 meters high and 8 meters wide and is the largest porcelain painting from Jingdezhen (in Jiangxi) in China now. The history of Eunuch Zheng He's seven voyages to the Western oceans from 1405 to 1933 is reflected on the surface of the painting. Zheng He was a great voyager of China in the Ming Dynasty, who led his fleet of ships to make voyages to over 30 countries and regions in Asia and Africa. Great voyagers Columbus made his first voyage to America in 1492, and Magellan made a voyage around the globe in 1519. In contrast, the great impressing feats of Zheng He's voyages to the Western Oceans is 97 and 114 years earlier than Columbus' and Magellan's voyages respectively.

On the top floor, you will appreciate the double-side embroidery of the Four Famous Towers. It was completed by 15 embroidering workers in more than half a year, consuming 1.5 kilograms of silk thread. On the surface is embroidered the four famous towers in China--the Yueyang Pavilion in Yueyang, Hunan province, the Yellow Crane Tower in Wuhan, Hubei province, the Pavilion of Prince Teng in Nanchange, Jiangxi province and the Yuejiang Pavilion in Nanjing, Jiangsu province.

You can watch and appreciate the scenes over and along the Yangtze River from both wings. Climbing up the Yuejiang Pavilion, you can get a full view of the scenes on the immense river below. The view of all beautiful scenes of Nanjing is so panoramic that you will feel relaxed and pleasant, and so much that you can not see over. Brightly lit-up at night, the Yuejiang Pavilion is crystal-clear and magnificently shining. It is the best sentiment to watch and appreciate the lights and lanterns near, over or along the Yangtze River and the beautiful scenes of the city in the evening.

Qixia Temple is seated on the west side of Fengxiang Peak, the main peak of Qixia Mountain. It is established in the seventh year (489 A.D.) of Yongming, Southern Qi Dynasty. With a history of more than 1,500 years, it’s one of 480 temples of Southern Dynasty. As there were many eminent monks from each generation and spread three theories of Buddhism, it became the ancestry house of the “three theories of Buddhism”. The temple, full of splendid Buddhist atmosphere, together with Yuquan Temple in Hubei, Lingyan Temple in Shangdong, Guoqing Temple in Zhejiang are called “Four Famous Buddhist Temples” in China. Now, it’s a cultural relic unit under provincial protection. 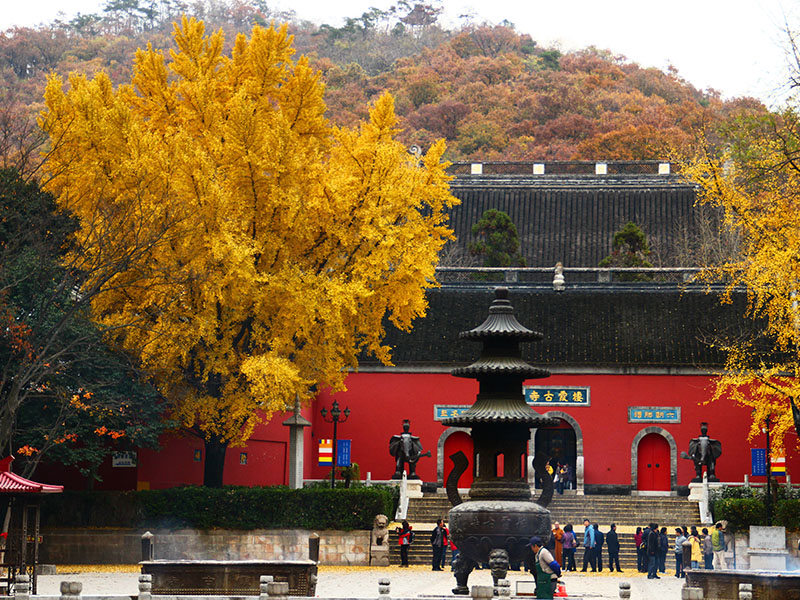