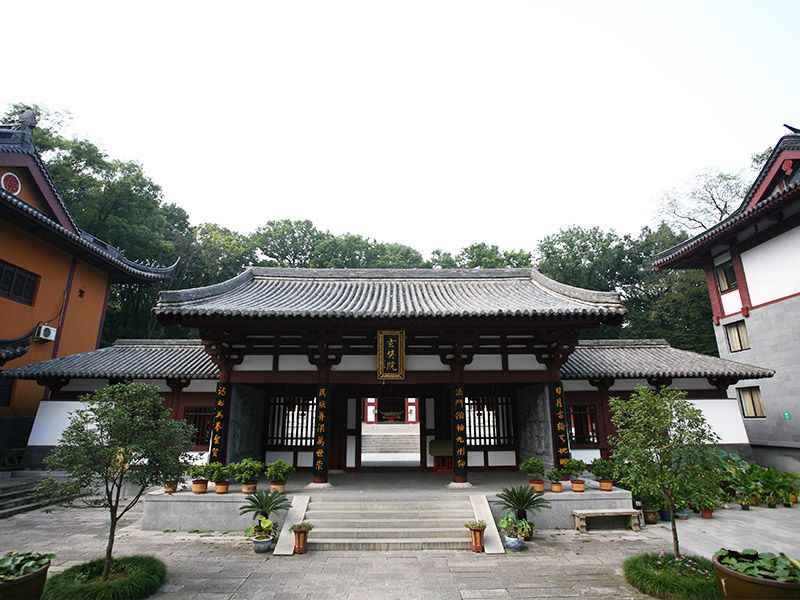 Linggu Temple is a Buddhist temple in Nanjing, Jiangsu, China. The temple was described as 'the best Buddhist temple in the world'. It was now surrounded by a large park. The temple was first built in 515 under the reign of the Liang Dynasty (502-557). It used to lie at the northeast foot of Mount Zhongshan, i.e. where Ming Xiaoling Mausoleum now locates, since Emperor Zhu Yuanzhang chose the place to be his mausoleum and then the temple was moved to the present place. The temple was named by Emperor Zhu Yuanzhang himself. It used to be large and covered an area of over 300,000 square metres. Later it was destroyed in warfare under the reign of Emperor Xianfeng and rebuilt under the reign of Emperor Tongzhi in the Qing Dynasty (1644–1911). In the temple, except for Buddhas and Bodhisattvas, Monk Xuanzang and his relic were enshrined and worshiped. Wuliang Hall, or Beamless Hall, was constructed in 1381, and is 22 metres high and 53.8 metres wide. The hall enjoys high reputation for its special architectural techniques. It has three archways on the front and rear sides respectively. The structure was built with bricks from the bottom to the top entirely, without a piece of wood or a single nail. Thus it was called Wuliang Hall, since Wuliang means beamless. It happens that the hall originally enshrined Amitayus (Buddha of Infinite Life) whose Chinese name pronounces the same with Wuliang. Later in 1928, the hall was turned into the memorial hall of soldiers who lost their lives in the War of Northern Expedition (1926–1927). More than 30,000 soldiers were enshrined. Linggu Pagoda was built in 1929 as a sign of remembrance for those soldiers. The 9 stories pagoda stands 60.5 metres high. Speeches made by Dr. Sun Yat-Sen and epigraphs of Chiang Kai-Shek were inscribed on the tower. In the temple there is also a Three Superb Tablet, on which a painting of Monk Baozhi painted by Wu Daozi, a famous painter; a memorial poem written by Li Bai, a Tang dynasty poet; and calligraphy written by Yan Zhenqing, a well-known calligrapher in the Tang Dynasty (618-907) were inscribed. Since the three were all masters in their own field in the Tang dynasty, the tablet was considered Three Superb Tablet. Unfortunately, the original tablet was broken in warfare, the present one is a duplicate under the reign of Emperor Qianlong in the Qing dynasty.