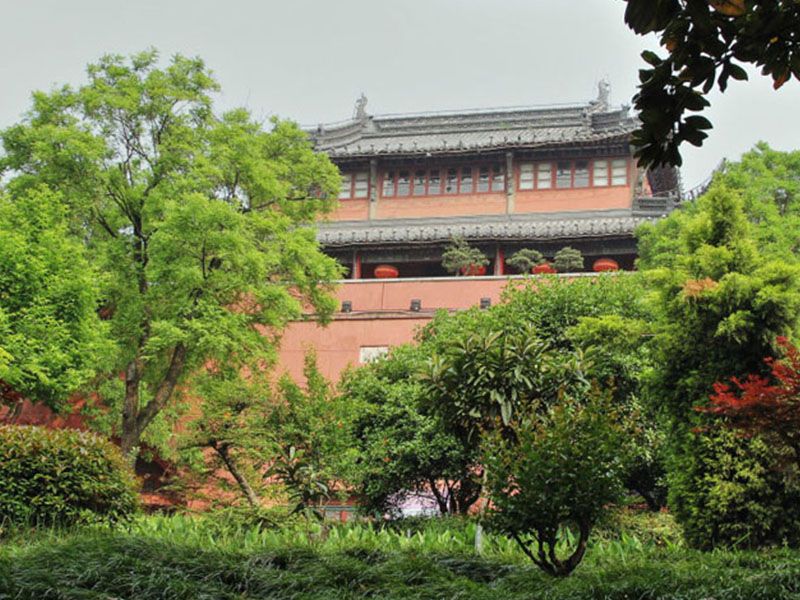 The Drum Tower lying on the western side of the People's Square in Nanjing City was first built in 1382 in the Ming Dynasty. Afterward, it was destroyed and rebuilt for several times. The existing structure was built at the end of the Qing Dynasty. The elevated stand of brick on which Drum Tower is rested is the original one of the Ming Dynasty. It is 8.9 meters high, 44.4 meters from east to west, and 22.6 meters from south to north. In the middle are three cylinder-shaped passageways from east to west for people to pass through. On either side of the front wall is a stone stairway leading to the stand surface where there is a rectangular pavilion with a gable and hip roof. Behind the two pavilions stands a two-storied tower with double eaves and a gable and hip roof, that is, the Drum Tower. It has three bays, with a length of 13.77 meters, a depth of 10.67 meters and a height of over 30 meters. On the four sides are window lattices by which people can look far into the distance; thus it is also called "Good View Tower". The Big Bell Pavilion lies at the intersection of Zhongyang Road to the northeast of the Drum Tower. The two structures face each other across the roads. At the back of the Big Bell Pavilion is Beijige (North Pole Pavilion). The former bell tower at the beginning of the Ming Dynasty lay to the west of the Drum Tower and contained three bells: a ringing bell, a vertical bell and a horizontal bell. Afterwards, the bell tower, the ringing bell and the vertical bell were destroyed and only the horizontal bell remained. In 1889 the official of Jiangming Xu Zhenwei built a pavilion at the present site and hung the horizontal bell in it. It is said that this bell is one of the four existing big bells of the Ming Dynasty, and its ringing can be heard five kilometers away. The pavilion has a pyramidal roof, double eaves and six sides, with a height of 14.5 meters. The big bell hangs on the frame of iron pillar and beam. Being the central structures of Nanjing City, the Drum Tower and the Big Bell Pavilion have become important symbols of the ancient city of Nanjing.

The drum towers shape is like a Chinese traditional city gate, with a square foundation pedestal made of stone. In the pedestal, there are three arch gateways, one larger in the middle and two smaller on the side. In the side gateways, there are four side-rooms, which were guarded by the imperial drumming officers with hundreds of soldiers during the ancient dynasty. On the pedestal is a red two-story watch tower, made of wood and bricks, which was a sacred place to hold some important ceremonies, such as giving a correct time, welcoming honorable guests, offering sacrifices to the god, and others.